The Celithemis Dragonflies of the Mid Atlantic Region

Some of my favorite dragonflies belong to the genus Celithemis.  Flying throughout the summer, these showy dragonflies are called Pennants.  In the Mid Atlantic region there are eight species and they are usually fairly common if you seek them out in the correct habitats.  Below I will describe all eight species. 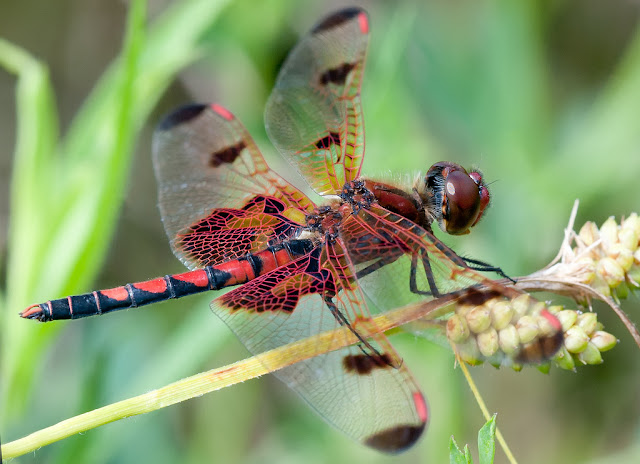 Calico Pennants are arguably the most common of the Celithemis dragonflies.  They have a long flight period that ranges from May into September depending on the locale.  They can be found throughout the Mid Atlantic around lakes and other bodies of still freshwater.  Males are easily distinguished from other pennants by the extensive red wing coloration and the red diamonds on the black abdomen. 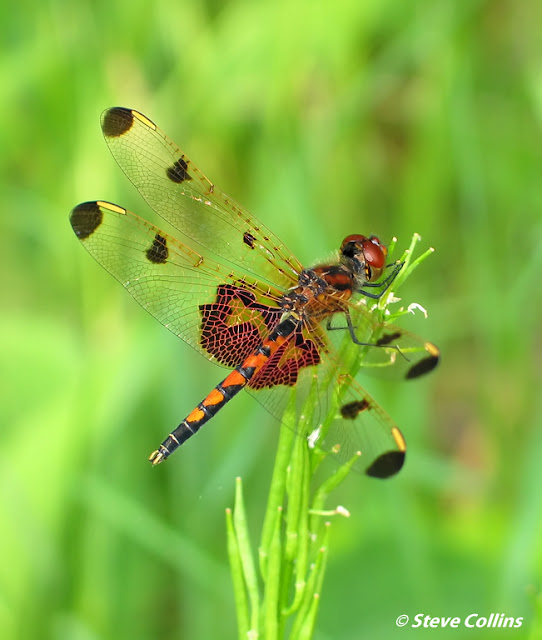 Females are a little more tricky but still fairly easy to identify.  Females are colored black and yellow.  The wing pattern is the same as the males but the color is much more yellow and the abdomen diamonds are also yellow. 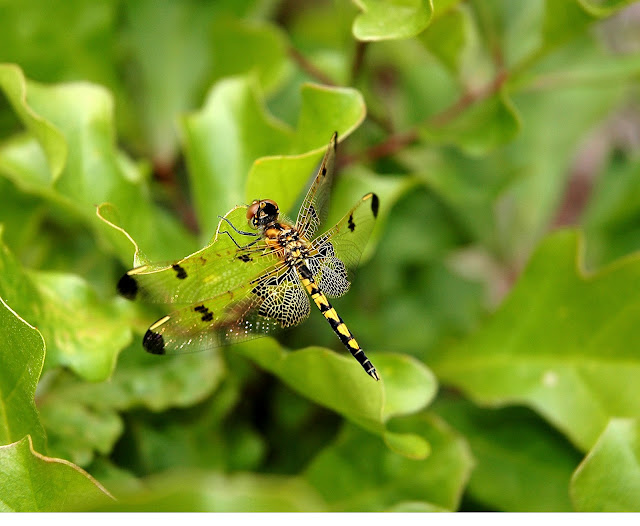 The only other female pennant with black wing tips is the Halloween Pennant.  That said, the wing patterns are way different and with a little practice the two species can be easily differentiated in the field. 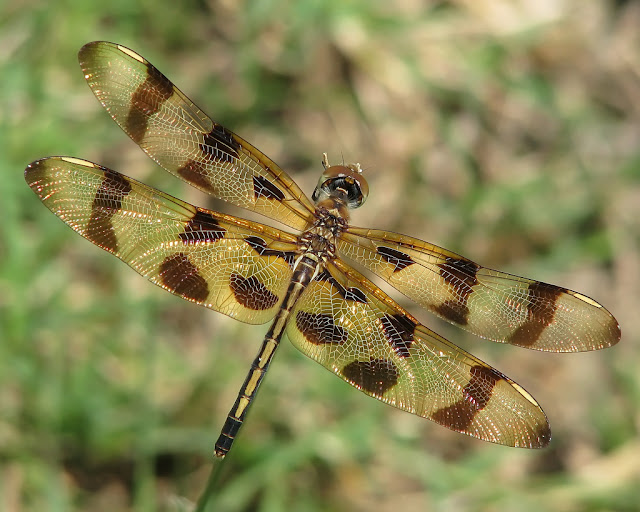 Halloween Pennants are also common dragonflies that are found throughout the Mid Atlantic.  Their flight period is a little later than Calico Pennants with flights starting in June through the beginning of September.  Unlike the Calico Pennant their wing markings are smaller and more spread out across the wing.  Males are typically more reddish than the females which usually have a more brownish yellow tinge. 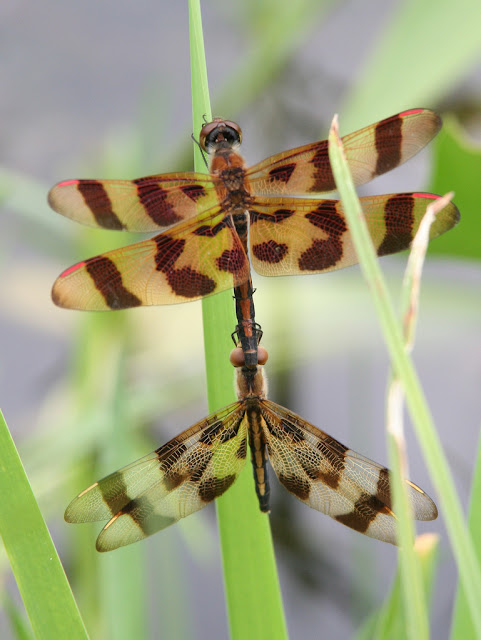 In the above photo the male is the top bug and you can see the more reddish coloration compared to the dingier looking female.  Like most of the Celithemis dragonflies Halloween Pennants can be found around freshwater lakes and marshes. 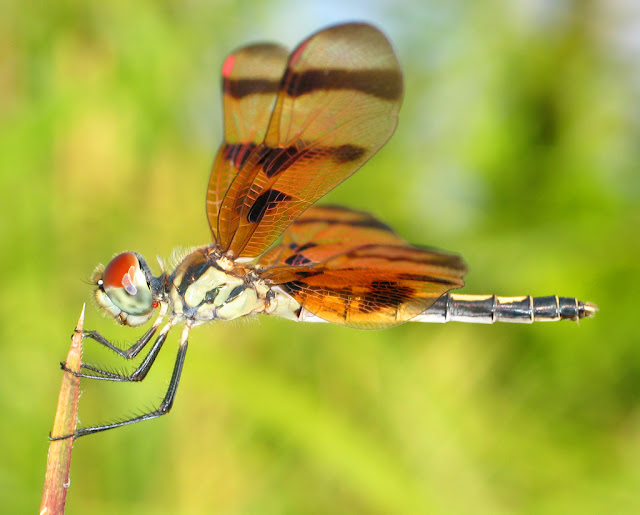 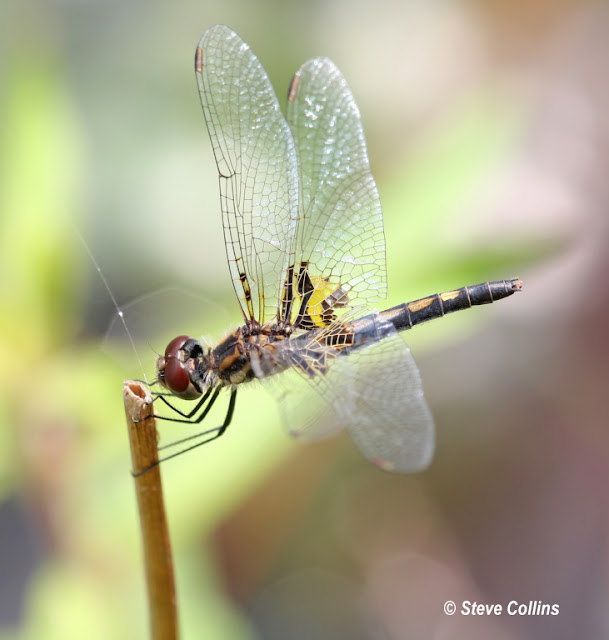 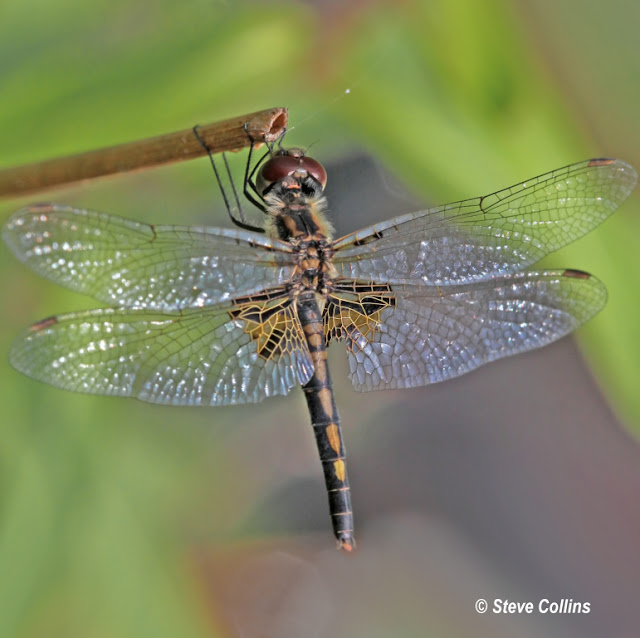 Like the other pennants, the males are more brightly colored with reddish wing markings and red diamonds that run down a black abdomen. 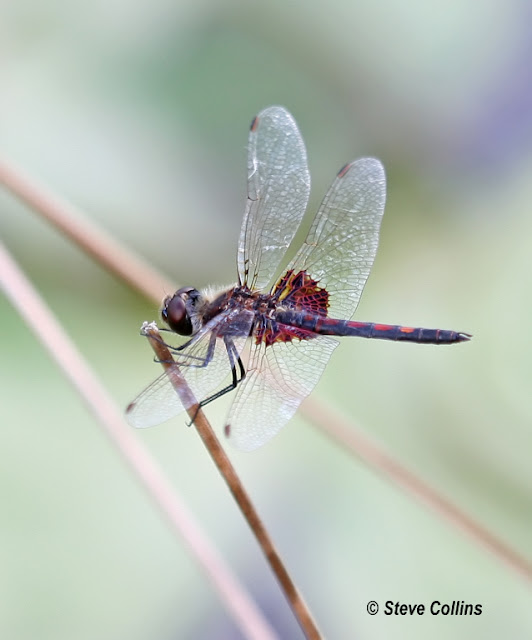 Ornate Pennant is also known as Faded Pennant and in Maryland they are know to hybridize with Martha's Pennant. 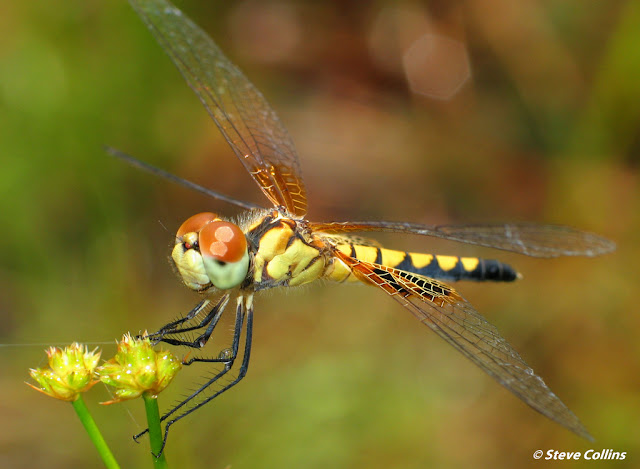 In the Mid Atlantic, Amanda's Pennants are only found in North Carolina.  This species is the smallest of the Celithemis.  They frequent vegetated freshwater lakes and are only found along the coastal plain. As noted above, Amanda's Pennant is very similar to Ornate Pennant, but a good look at the wing marking should allow the observer a positive id. 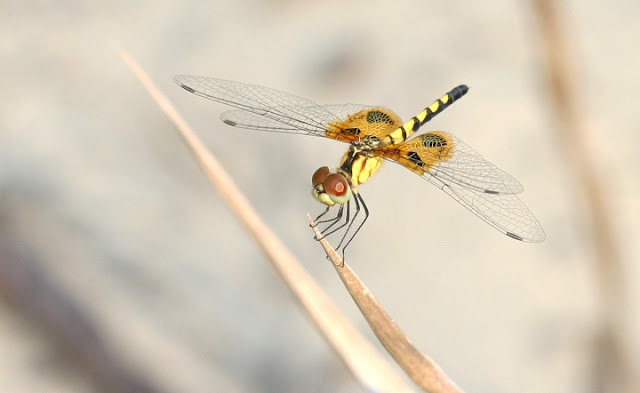 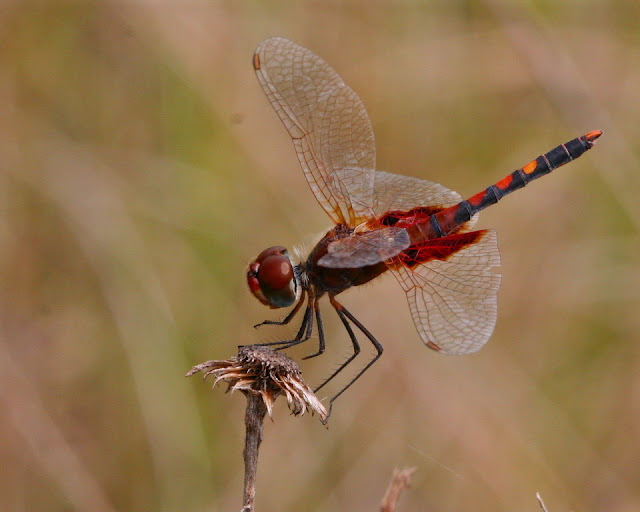 Like many of the other pennants, the male has deep red wing markings and red spots down a black abdomen. 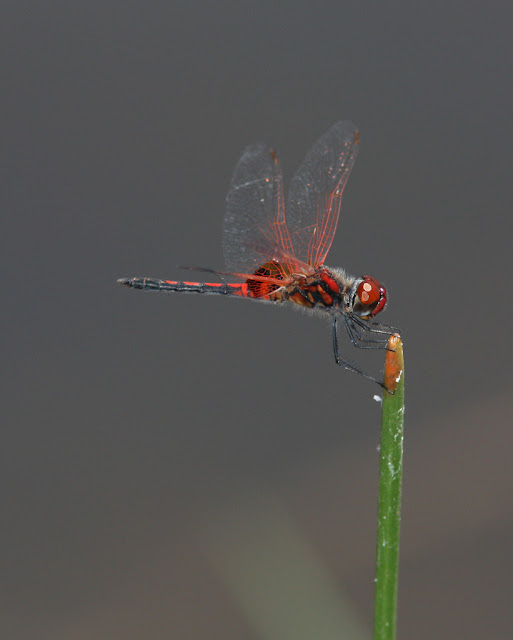 In the Mid Atlantic, Red-veined Pennants are only found in North Carolina and extreme southeastern Virginia.  More common on the coastal plain, these bright red pennants can also be found less commonly in the piedmont.  They prefer very shallow vegetated small lakes.  Red-veined Pennants can easily be identified by the bright red veins on the leading edge of their wings. 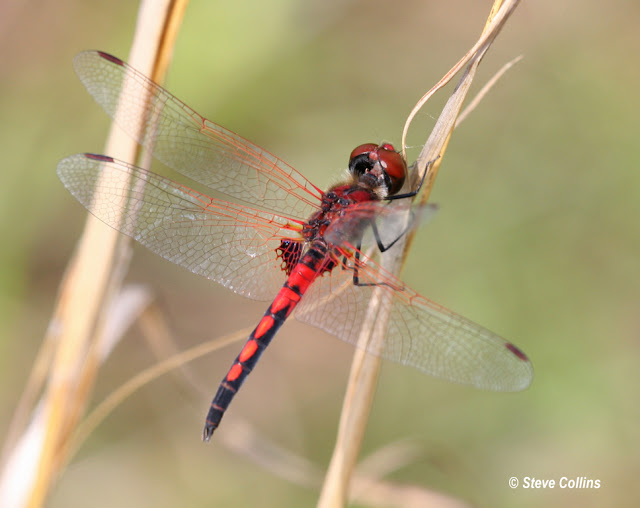 Unlike the previously mentioned species, Red-veined Pennants do not have extensive or large wing markings. 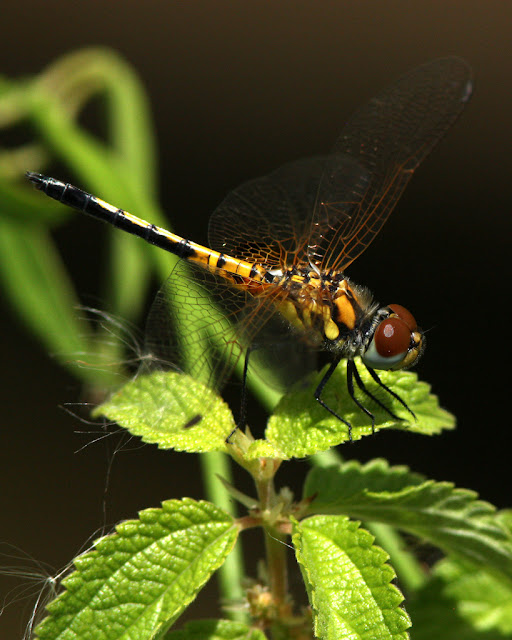 The above photo is a young male whose coloration hasn't changed to the deep red of an adult.  Females are very similar in appearance except they typically lack the dark wing vein coloration.  Females look similar to the other yellow female pennants except they lack large wing markings. A female Red-veined Pennant has two small round areas on the lower wing that hug the abdomen.  This should differentiate them from all other female pennant species. 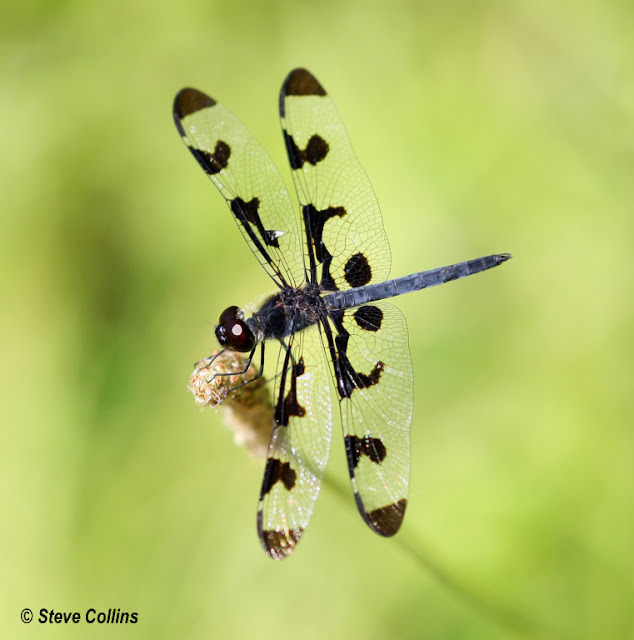 Banded Pennants are one of my favorite dragonflies.  Unlike the other pennants described above both the male and female have a more blue black coloration.  Banded Pennants can be found through the Mid Atlantic at lakes and ponds.  The males blue body with extensive wing markings is diagnostic which makes identification very easy. 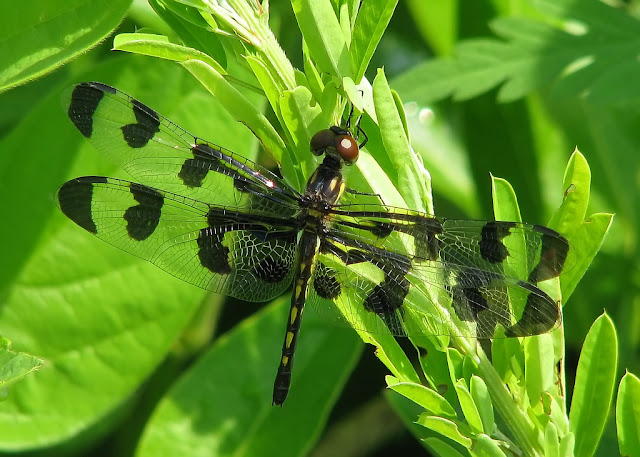 The female Banded Pennant has yellow spots that run down the abdomen along with yellow on the thorax.  This color scheme coupled with the extensive black wing markings is unique and once again makes for easy identification. 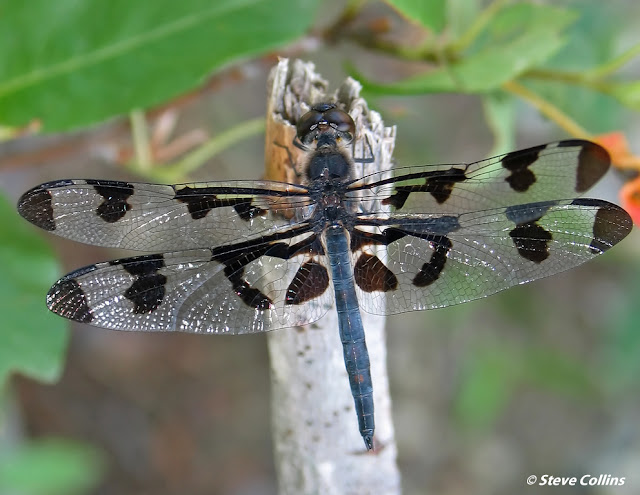 Martha's Pennant is a small pennant with a more northerly range than most of the Celthemis pennants.
With a few records from Virginia and only a couple populations in Maryland, Martha's Pennant becomes very common in New Jersey and then once again becomes uncommon in New York and northward.  Like the Banded Pennant, the male has a blue body but only has two wing markings that hug the abdomen on the lower wing. 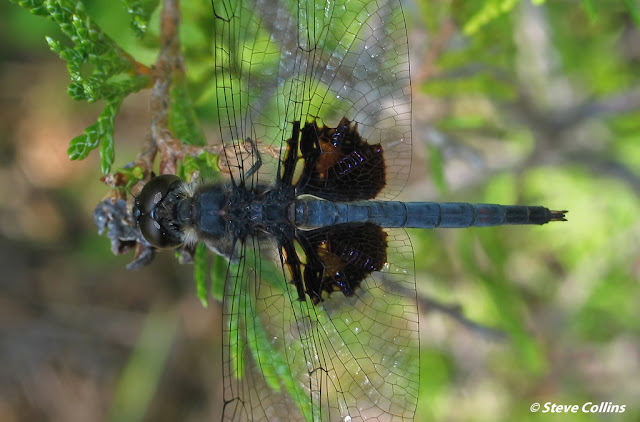 Female Martha's Pennants are more yellowish with yellow on the sides of the thorax and yellow spots that run down the back of a black abdomen.  The females wing markings match the males in size but are more yellow in coloration. 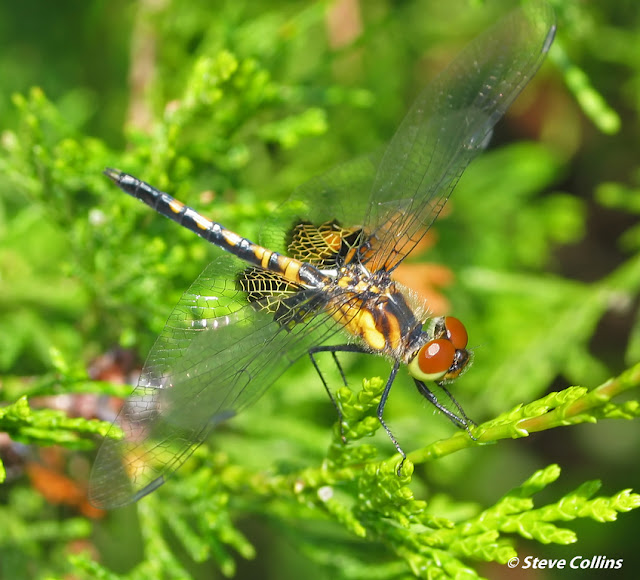 Like most other pennants they can be found at still freshwater lakes with lots of vegetation.

Double-ringed Pennants can be found from New Jersey south through the Mid Atlantic into the Carolinas and beyond.  Like Banded and Martha's Pennants, the Double-ringed Pennant male is all blue, but is different in that the bug has two very small markings on the lower wings that hug the abdomen. 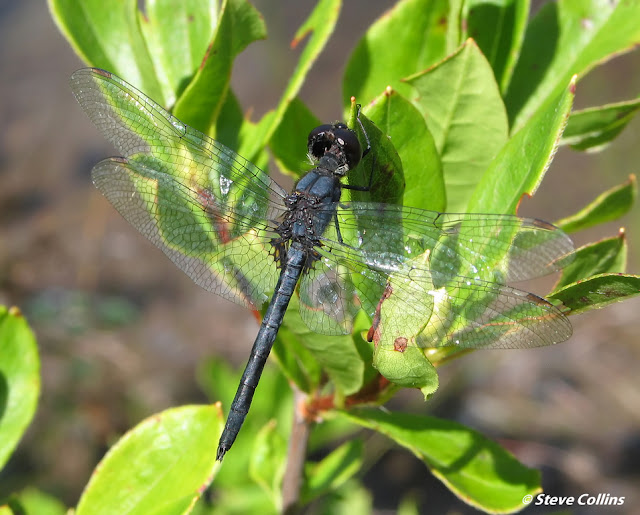 As you can see in the above photo, the wing markings are very small.  Double-ringed Pennants have the smallest wing markings of any of the Celithemis pennants.  The female and young males have one distinguishing feature that is unique and makes for easy identification.  They have two yellow rings around the abdomen.  This feature is easily seen in the photo below. 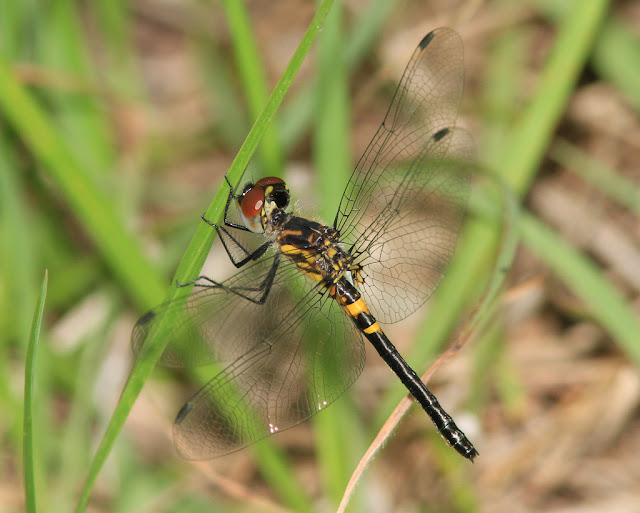 I would like to thank all the photographers who made this post possible, especially Steve Collins who graciously opened up his photo coffers for the taking.  Please go to their websites and check out their incredible photography.

For more information on Dragonflies in Maryland I highly recommend Richard Orr's website which contains great photos and a wealth of checklists -- http://www.marylandinsects.com/index.html