The Coppers (Lycaena) of the Mid Atlantic Region

One of my favorite families of butterflies are the Coppers.  Coppers belong to the family Lycaena.  They are a world wide family with sixteen species represented in the United States.  The Mid Atlantic region has three representatives of the family;  American Cooper, Bronze Copper, and Bog Copper. Coppers are not terribly common in our region, but with an understanding of habitat it's not that difficult to find all three species. 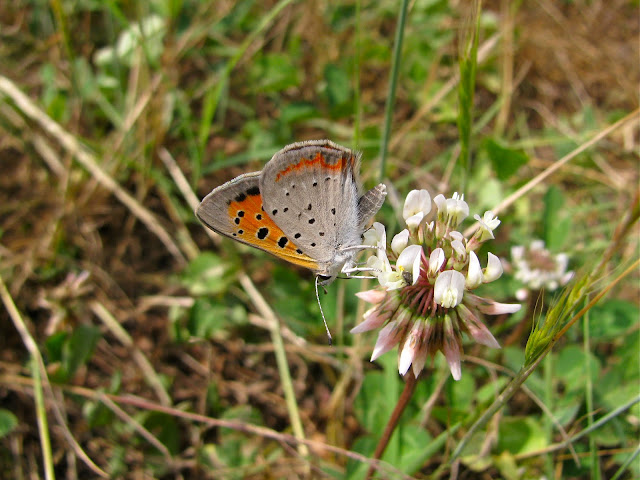 American Copper is the most common of the three copper species in the Mid Atlantic region.  They are well represented throughout the region.  From New York to Virginia and West Virginia they are found through out, but in North Carolina they seem to be absent from the coastal plain.  American Coppers are often found in disturbed areas like road sides, fields, and barren areas. 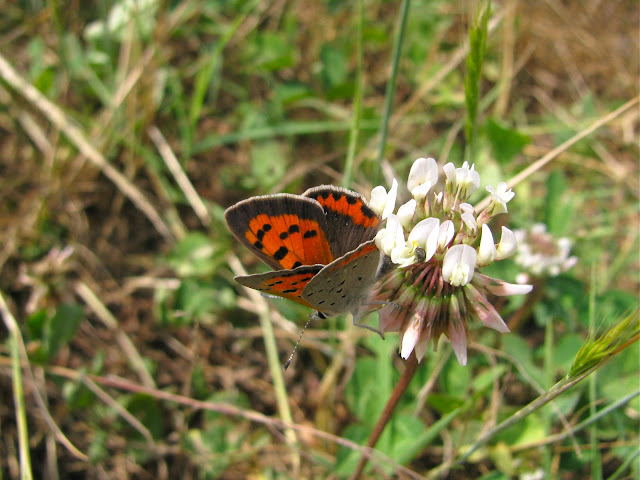 Strangely, the American Copper's hostplants are non-native buckwheats like Sheep Sorrel and Curled Dock.  A hostplant is the type of plant that a butterfly species will lay her eggs on.  Once the eggs hatch into caterpillars, the caterpillars use the hostplant as food. Some experts feel that since the hostplants of the species are not native that it is possible this butterfly was an early colonizer that came from Europe with early settlers (American Copper is found throughout Europe and Asia).  Other scientist's disagree, and point out that other butterfly species have changed their hostplants to alien species and argue that there isn't enough supportive evidence to prove the theory.  Below are photos of Sheep Sorrel and Curly Dock, the most common hostplant of American Copper. 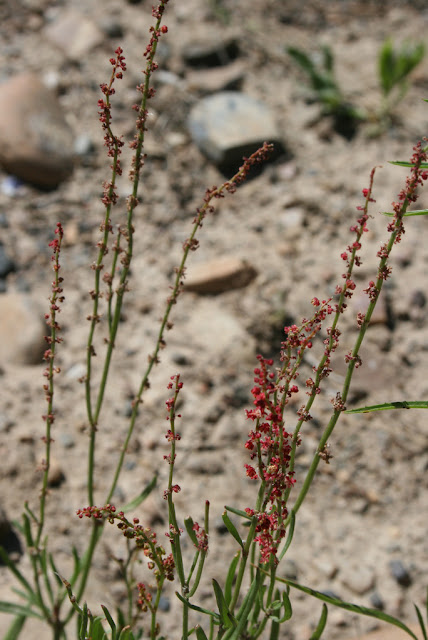 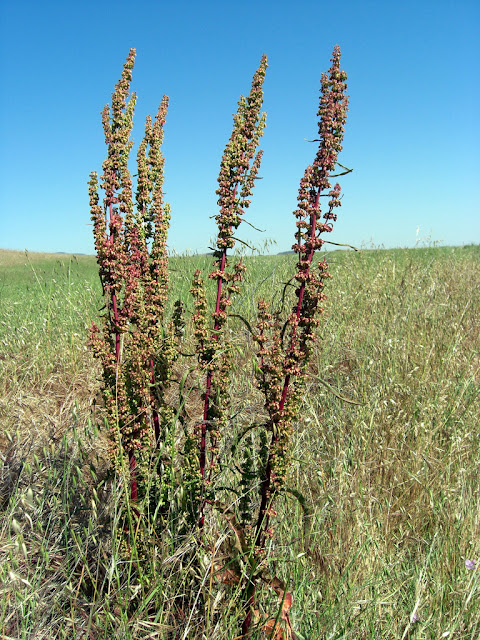 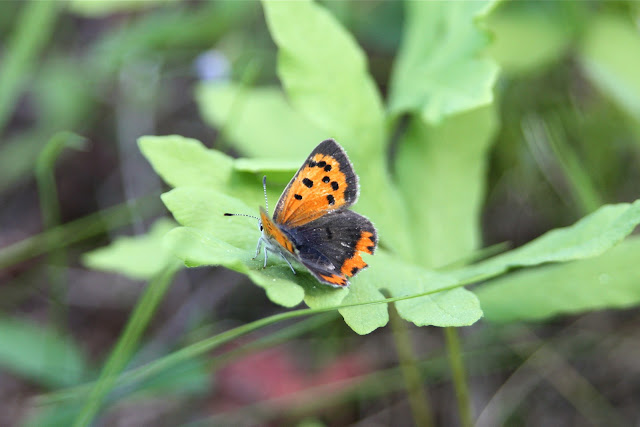 Bronze Coppers are much larger than American Coppers and they are typically found in different environments.  Bronze Coppers prefer moist to wet weedy meadows, pond and ditches with tall grassy edges, and freshwater marsh edges. 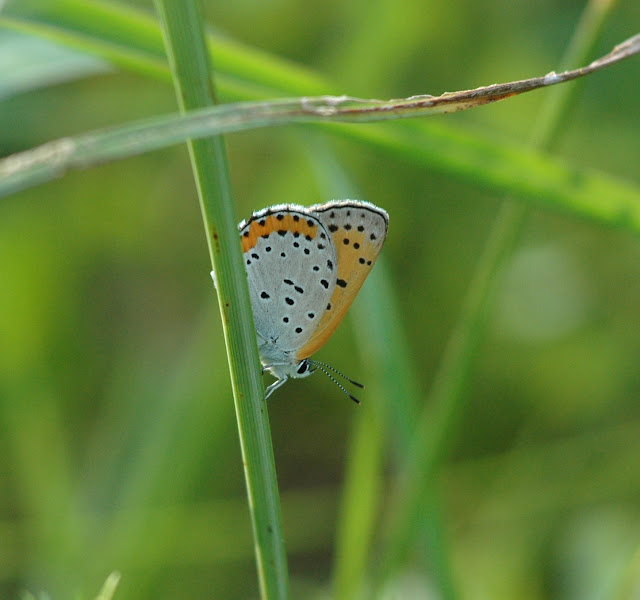 Unfortunately, Bronze Coppers have been disappearing from many of their known locations.  Disturbance and destruction of much of their habitat in the east is definitely one of the reasons this beautiful butterfly is becoming scarce.  In the Mid Atlantic region they are found from New York, south through to Maryland and West Virginia.  Although I believe there are records for Virginia, I don't believe there are any extant populations.  In the Butterflies and Moths of North American website they only have two records for Virginia, one on the Eastern Shore and one near Manassas.  Bronze Copper has not been recorded in North Carolina. 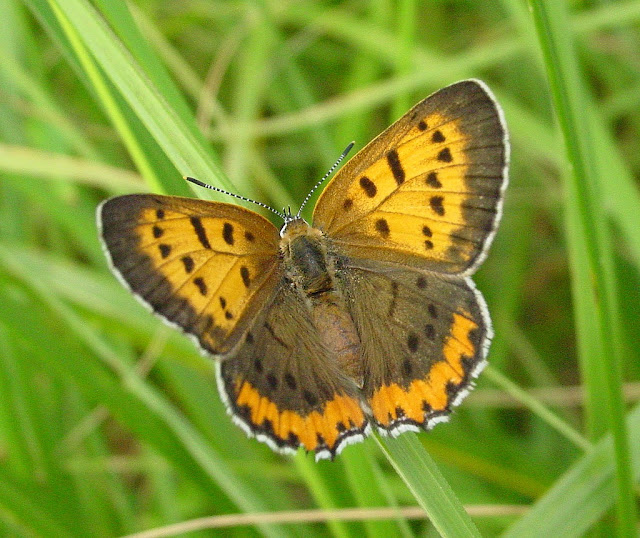 Like the American Copper, Bronze Copper also uses docks as hostplants.  Our native Water Dock is the preferred hostplant, but Curly Dock and knotweeds have also been reported as hostplants. 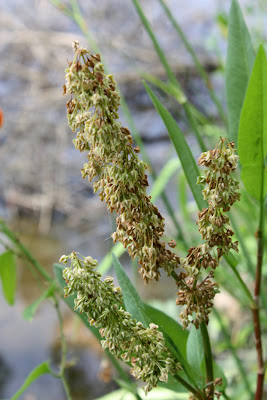 The Bronze Copper is considered endangered in New Jersey and is threatened in West Virginia. I know of a few populations in Queen Anne's County and Dorchester County, Maryland.  They seem to be doing quite well over the five years that I have been checking on them. 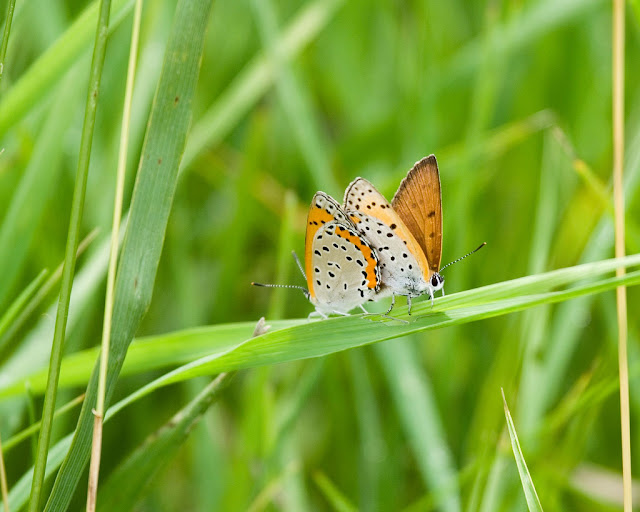 
Bog Copper is by far the rarest of the Mid Atlantic regions coppers.  Bog Coppers are only found in acidic bogs that have cranberries.  Maryland and West Virginia have a disjunct population that is separated from the population that lives from New Jersey north into New England. 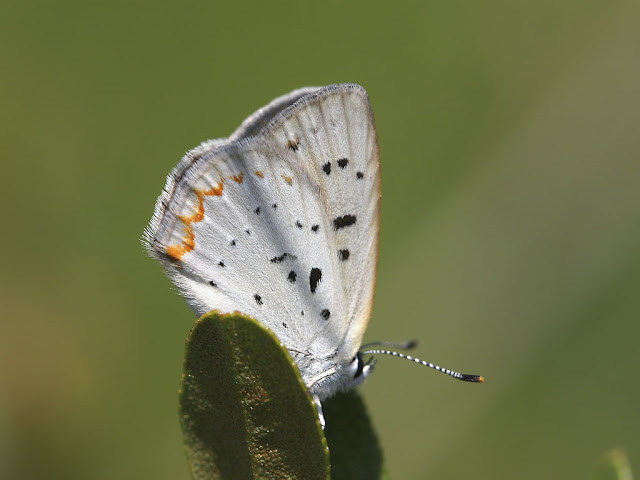 Bog Coppers are smaller coppers that spend the entirety of their lifespan in the same bog where they were born as caterpillars.  They are very weak fliers and spend much of their lives sitting on their hostplant.  Their flight season in the southern portion of their range is in late June and early July while farther north they can fly into August. 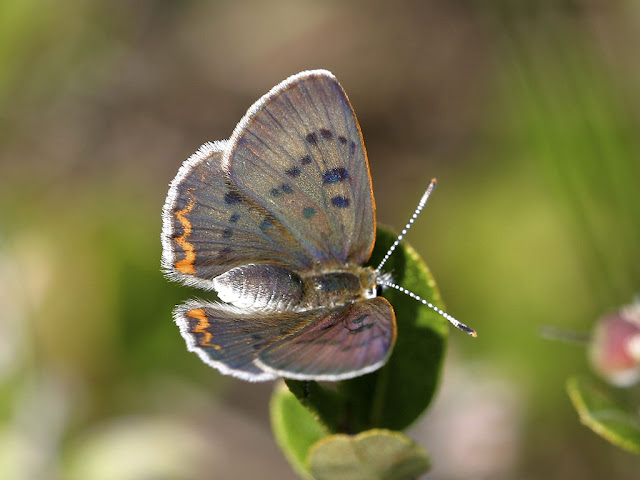 The hostplant for Bog Coppers is cranberry.  In the southern portion of the copper's range the species of cranberry is Vaccinium microcarpa (Large Cranberry) and in the north it is Vaccinium oxycoccos (Small Cranberry). 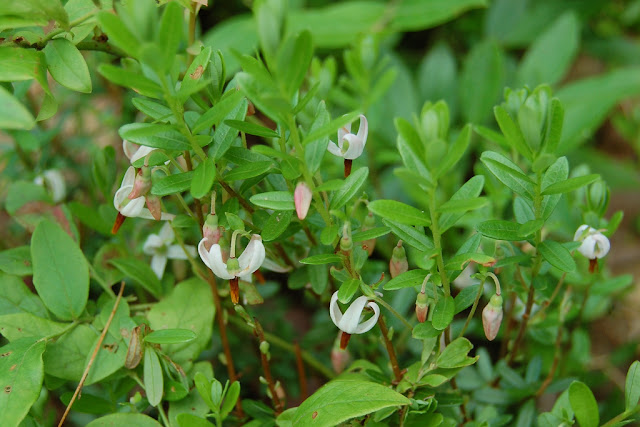 Because acidic bogs with cranberries are rare in Maryland, I only know of one population.  Thankfully, the bog is protected, so hopefully this population of Bog Copper will continue to thrive.  New Jersey seems to be a good place to view Bog Coppers because of the many abandoned cranberry bogs where they used to harvest the berries for commercial use.  Bog Coppers are considered endangered in Maryland and West Virginia and it is listed in Pennsylvania as vulnerable. 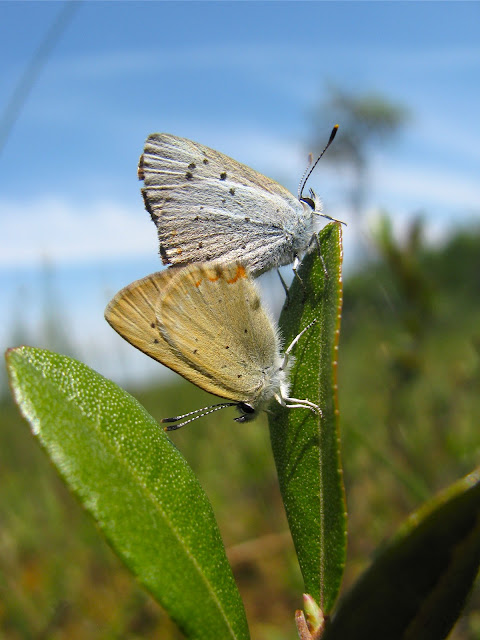 Some books that might be of interest to those who might want to pursue butterflies of the Mid Atlantic region.

Butterflies through Binoculars: The East A Field Guide to The Butterflies of Eastern North America. Glassberg
http://www.amazon.com/Butterflies-through-Binoculars-Eastern-America/dp/0195106687/ref=sr_1_2?ie=UTF8&qid=1335138469&sr=8-2