We have a couple firsts at Mid Atlantic Nature; our first guest post and our first quiz. Bill Hubick has written a great piece on Assateague Island and ends the post with a quiz. We encourage everyone to participate. I'll post the answers and the top three winners Monday evening.
One of the true joys of nature study is becoming more intimately familiar with a place. Tuning into the subtle seasonal differences between local and regional patches might be the most rewarding aspect of being a naturalist. In addition to tapping into an endless source of fascination, you significantly increase the options for exciting finds on a given day. If you visit Assateague on a cold November morning and aren't excited about a Blue-gray Gnatcatcher or an American Redstart, it is a tragedy. You are ignoring the majority of potential rarities and the accompanying fun! The same applies to any other species that are locally or seasonally rare. Allow yourself to be intrigued by that Red-eyed Vireo in your yard in late June that hasn't been there since April. Be excited about a new species for your daily walk into work. I like knowing that Woodchuck (Groundhog) is uncommon and local on the Eastern Shore. I have seen it in 22 of Maryland's 23 counties and my still needing it in Somerset County is not due to a lack of looking. Grasshopper Sparrows seem to be local in the county as well. Are these two facts related? Listing games provide a framework for us to learn. Before month listing and eBird review, I had little reason to know that an April 28th Acadian Flycatcher is totally expected, while an April 21st Acadian Flycatcher should be photographed.

Because of its unique characteristics, Assateague Island is perfect for considering distribution of species. For anyone not already familiar with Assateague, it is a 37-mile barrier island south of Ocean City that lines much of the Maryland coastline south to Virginia.

Although it supports a variety of microhabitats, sandy beaches and dunes dominate the island landscape. Scrubby areas and loblolly pine woods support an impressive diversity of bird life, especially in migration. The island is a natural concentration point, and it is without question the top birding destination in Maryland. It has hosted many of Maryland's most outlandish rarities, including American Flamingo, Rock Wren, Sage Thrasher, and Smith's Longspur. It is most famous for its population of feral horses. 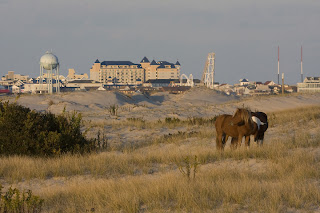 Photo: Bill Hubick
Ocean City as viewed from the north end of Assateague Island.
For this quiz, try to sort the following 40 species (birds, mammals, and reptile/amphibians) into two columns, "Rare/Absent" or "Regular." As long as a species is seasonally regular, such as migrant Black-throated Blue Warblers or wintering White-throated Sparrows, you should file it as "Regular". The species we are calling "Rare/Absent" have been seen rarely or never by most of us who have visited Assateague compulsively for the last 10 years or so. Species seen in flight over the mainland from Assateague Island do not count. We recommend trying this without resources, as tools like eBird will make the birds rather easy. If you have never visited the island, make educated guesses! Consideration of the general geography and habitat, as well as the natural history of the listed species, will likely lead to many correct answers.
Please send your answers to Jim Brighton (jimbrighton3@gmail.com) and Bill Hubick (bill_hubick@yahoo.com). We'll post the answers next week!
Wildlife populations are dynamic. While the Northern Bobwhite population has crashed on Assateague Island, Wild Turkeys seem to have caught a foothold. 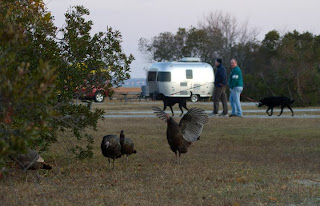 Photo: Bill Hubick
Wild Turkeys on Assateague Island
"That’s how one learns avian status and distribution! Ditto the county-listing (and month-listing) fanatics on the state and provincial level; they are often the ones who know bird distribution in their home state better than anyone. If listing means knowledge, then it’s more than a game."
-- Paul Lehman (Birding, January 2012)
Posted by Jim Brighton at 3:58 PM