Part two of our discussion on winter and early spring vernal pool egg mass identification is going to concentrate on Salamanders. Let's do a quick recap on how to differentiate between frog and salamander egg masses. 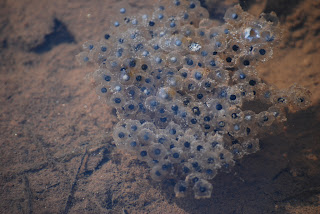 Frog egg masses do not have the protective outer gelatinous layer. The outer edge of the mass is the eggs themselves. 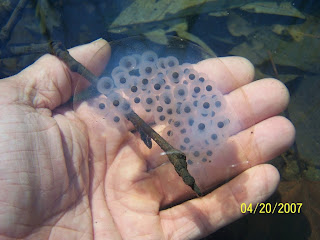 Salamander eggs have an outer gelatinous layer that completely surrounds the egg mass. Once you have determined whether you are looking at frog or salamander eggs you can begin to try to get the egg mass to species. Below I will outline how to identify salamander egg masses that are found in the Mid Atlantic region's vernal pools. I have included maps from the USGS National Amphibian Atlas that show ranges for each species to county level. The color codes are as follows: Dark Green = Museum record, Middle Green = Published record, Light Green = Presumed presence, no green = no known occurrence.

There are three species of salamander that lay large egg masses in our area. All three salamanders belong to the genus Ambystoma. Members of this genus are usually only observed during the mating season because they spend most of their lives underground. 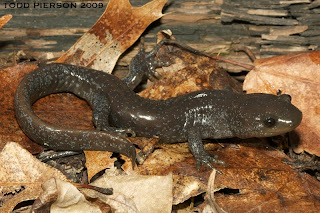 In the Mid Atlantic region Jefferson Salamanders are found from southern Virginia through New York. Mainly they are found on the piedmont or mountains. There are breeding populations on Long Island, NY which I believe is the only coastal plain population in our region. 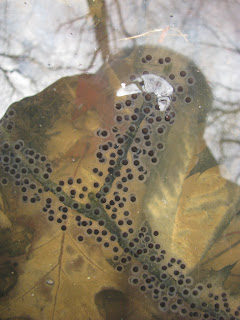 Females usually lay between 10 - 60 eggs per mass. As mentioned above the female will lay her eggs on a submerged stick. On one stick a female may lay more than one mass. As the egg masses age they will swell and merge looking as if it is one large egg mass when in actuality there are many. Jefferson Salamander egg masses are not firm. If you lift a stick with attached Jefferson Salamander eggs they will probably fall off as soon as the stick leaves the water. 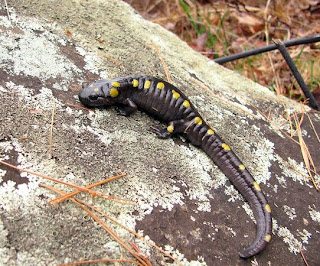 Spotted Salamanders are our most common Ambystoma. They are located throughout the Mid Atlantic region. Uncommon on the coastal plain they become increasingly common through to the mountains.

In our region Spotted Salamanders breed from February through March. Like the Jefferson Salamander, Spotted Salamanders usually lay their eggs on submerged sticks. They usually consist of 50 - 250 eggs. Egg masses are normally an oblong rounded shape like in the photo below. 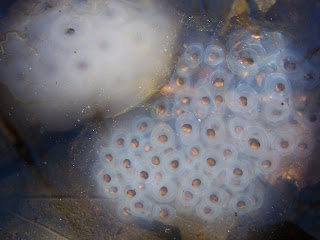 According to James Petranka in his book Salamanders of the United States and Canada, Spotted Salamander egg masses occur in three color types.

The egg masses of Spotted Salamanders consist of clear, white, and intermediate color morphs depending on the presence of proteins in the outer jelly layers. Local pond populations often lay only clear egg masses; however, masses that are milky white in appearance can make up a high percentage of egg masses in some populations. Intermediate forms are relatively uncommon.

Spotted Salamander egg masses are firm. When taken out of the water they will usually retain their shape unlike the egg masses of Jefferson Salamanders. 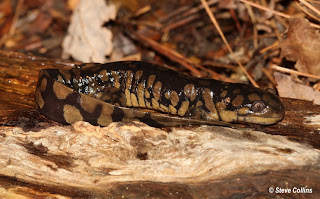 Eastern Tiger Salamanders are one of the Mid Atlantic regions rarest salamanders. They are almost completely limited to the coastal plain. Due to habitat destruction and introduction of fish into many of their breeding areas Tiger Salamanders in the east are becoming increasingly rare and are considered endangered in many states.

Tiger Salamanders are one of our earliest vernal pool breeders. Breeding can take place as early as November but the end of December and January are the norm. Tiger Salamanders often breed in more grassy open vernal pools. The photo below is an example of a type of vernal pool where Eastern Tigers breed. 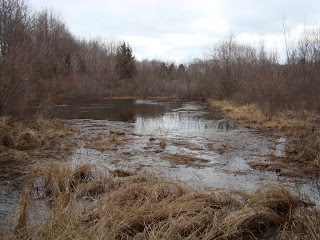 Eastern Tiger Salamander egg masses are smaller than Spotted Salamander masses. The mass usually contains around 50 eggs and is round or oblong in shape. Like the other Ambystoma discussed above, Eastern Tigers lay their eggs on submerged sticks and other debris. 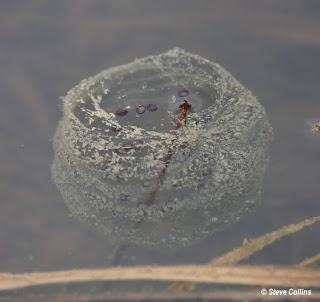 I would like to thank Steve Collins for helping me out with the Tiger Salamander photos. I would also like to thank the other photographers whose photos were used under the Flickr Creative Commons License.

The range maps I used are found on the USGS National Amphibian Atlas website.
http://www.pwrc.usgs.gov:8080/mapserver/naa/

Amphibiaweb is an amazing website. Hours of fun exploration available!
www.amphibiaweb.org
On the USGS website there is a page that has a field key to amphibian eggs of Minnesota, Wisconsin, and Iowa. Luckily, the Mid Atlantic region shares many of the same species. The key is really easy to use.
www.umesc.usgs.gov/terrestrial/amphibians/field_guide/figure2.html
On Field Herp Forum there was a post that helped me greatly with this blog post. The photos are awesome and his egg mass descriptions are very clear and concise.
www.fieldherpforum.com